Screen Mirroring without wifi has become a thing of the past. Nowadays, wireless screen mirroring is getting more and more popular. For this to work, the phone should have Miracast and the TV should also be Miracast compatible.

In this post, we are going to learn how to mirror the LG K51 screen to a TV with & without Chromecast –

Does LG K51 have Screen Mirroring?

For screen mirroring, the phone must have Miracast support. I searched for the “Cast” option on my K51 but failed to find it anywhere.

Without the “Cast” option we cannot enable wireless display mirroring on K51.

Now, we are left with only one option. We need to use Chromecast for screen mirroring on K51.

I’ve connected the Chromecast adapter to my TV.

It says we need to install the Googe Home app on K51 to setup Chromecast.

First of all, let’s connect our K51 to the internet via Wi-Fi.

Go to “Settings” > “Network & Internet” and connect to a Wi-Fi network.

My K51 is connected to the “Home Wifi-4G” network.

Use the Play store app to download Google Home.

Install the Google Home app and “Open” it.

We need to use an email account to set up Chromecast.

Add your Home nickname & address in the next step. 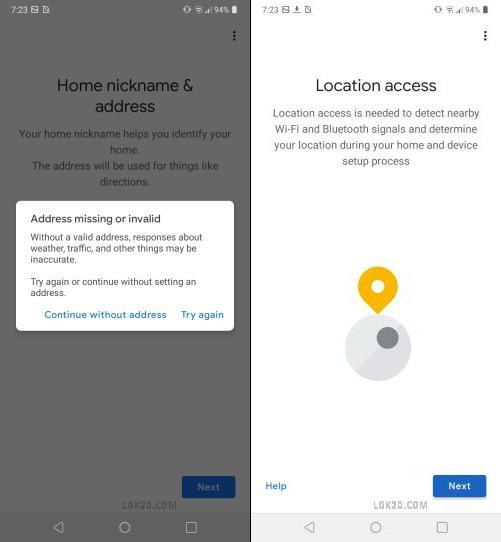 The location access is needed to detect nearby Bluetooth & Wifi signals.

For better connectivity, Bluetooth access is needed. Hit “Turn on” to enable Bluetooth.

Now, it’s searching for Chromecast devices in the vicinity.

A Chromecast device with id 5976 is found.

If it’s the correct Chromecast device, accept the setup request by clicking “Yes”.

Look at your TV screen. There is a setup code S3N4 on the big screen.

If you see the same code on your phone screen, we are connected to the right Chromecast device.

Choose the location of your TV. Mine is in the basement.

Chromecast is now connecting to the selected Wi-Fi network.

The Chromecast Setup is almost done.

Hit “Start Now” to view your K51 screen on the TV.

The phone screen is mirrored successfully to the TV.

We can control the volume from the Google Home app. I’ve reduced the volume to 48%.

The TV volume is reduced. Notice the volume bar on the TV screen.

This is the LG K51 home screen.

Let’s mirror a video on the big TV screen.

The video looks good on the TV screen.

The video playback can be controlled on the phone.

One more still from the K51 video playback.

We can do screencasting on the youtube app. It allows us to use the phone for some other task in the background. The video will keep playing on the TV screen.

Tap the “Cast” icon on the top right and cast it to the “Basement TV” as shown above.

Select a video and hit “Play” to begin screen casting.

The youtube video is playing fine on the TV screen.

On the phone, it reads “Playing on Basement TV”.

To end screen mirroring, open the Google Home app and tap “Stop mirroring” as shown above.

What to do when we don’t have Chromecast but some other Miracast devices such as Roku, Fire Stick, or a Smart TV?

We can still Cast our K51 screen to the TV without a Chromecast. We need to use a 3rd party app for this purpose. Let’s see how to do that –

I’ve trying to cast my K51 screen to the Fire TV Stick.

First of all, we need to connect our Fire TV stick to a Wifi network.

My Firestick is connected to the “HomeWifi-4G network.

We need to connect our K51 to the same Wifi network for Screen Casting.

Now that both the devices are connected to the same Wifi network, let’s download and install the screencasting app from Play Store.

We are going to use the “Cast to TV-Xcast” app for screencasting. Install and launch the app.

It’s searching for the nearby Miracast devices.

The Firestick is visible as “Philips’s Fire TV Stick”.  Tap on it to connect.

We need to tap the “3 bar” icon on the top-left for more options.

We can cast Video, Photo, Audio, and web content on the TV screen.

Let’s try to cast a video “Most unbelievable fish captures” to the TV.

We get the video controls on the phone screen.

It buffers for a second and the video starts playing on the TV.

A still from the video. You can read the watermark “Cast from XCast”.

The video playback is smooth.

We can also cast audio to the TV screen.

A music file being played on the TV screen.

On the video page, we need to hit the “Red Play Button”.

It allows us to choose the video resolution. Let’s play the video in 720p.

The video quality is good. There is no lag at all. It all depends upon your Wifi internet speed.

Another still from the youtube video being cast on the TV screen.

There is one more decent app for Screencasting on the play store – Web Video Caster.

We need to tick the Miracast devices we wish to scan.

It’s quite similar to the “Cast to TV” app.

The “Phone files” option can be used to cast the media files stored on the device.

The video control options are on the phone screen.

The video playback is just the same as the previous app.

The title is cut short. The full title is not visible on the TV screen.

The video started playing right away on the TV screen.

You can tap the “play icon” on the top to change the video resolution.

The youtube video title is incomplete. This was not the case with the “Cast to TV” app.

Hit the yellow play button on the top and select the desired screen resolution.

Replace this widget content by going to Appearance / Widgets and dragging widgets into this widget area.

To remove or choose the number of footer widgets, go to Appearance / Customize / Layout / Footer Widgets.